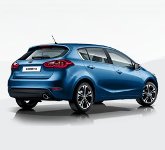 The second phase of Australia’s third-generation Cerato roll-out is well underway with the release of a 5-door hatchback variant, priced at $19,990.

This will be the perfect complement to the sedan, which hit the streets back in April.

It also serves as the set-up for the release of the new-generation Koup, which should help Kia steal sales in the super competitive small car segment.

The Forte hatchback is a little late coming, but Kia hopes to take advantage of the demand for the popular body style.

There is a precedent there, with the previous hatch release accounting for 70% of sales.

A quarter of a million small cars were sold in Australia last year, an astonishing 61% of which were hatches.

Kia will deliver 3 specification grades – S, Si and SLi – as well as a pair of petrol engines and choice of either manual or automatic transmissions.

The base S model will come with a 1.8-liter MPI petrol engine that delivers 110kW and 178Nm at a high 4700rpm, mated to either a 6-speed or automatic gearbox.

Fuel consumption will depend on the transmission and will come in at 6.6 liters per 100km or 7.1L/100km respectively.

The MSRP of the S model will start at $19,900, making it more expensive than the Holden Cruze and Nissan Pulsar.

Dig a little deeper, though, and you see that the S will be available as a driveaway, making it cheaper in real terms.

You can also pay an extra $1,000 to get a satellite navigation system with a 7-inch screen.

The new Cerato 5-door is longer by 10mm, lower by 10 and wider by 5mm, whilst also having a wheelbase that is 50mm longer than its predecessor.

The extra length on the wheelbase translates to more legroom in the cabin, whilst the other changes deliver more headroom for passengers.

The stiffer body shell and vibration-damping subframe make for a smoother, quieter ride. The addition of a fully-independent MacPherson strut suspensions set-up means that the car is designed specifically for driving on Australian roads.