The days of the minivan being one of the most popular vehicles on the road may be gone, but that doesn’t mean they aren’t still the vehicle of choice for some families.

The problem that families face is that the vans that survived the demise of the category – Honda Odyssey, Toyota Sienna and Chrysler Town & Country – are among the most expensive of the lot.

The Dodge Caravan tries to toe the line at an MSRP of $20,000, but finding one at that price is a miracle.

Any model that comes in at that price is nothing more than an advertising gimmick that has features stripped to the bare bones.

What about those folks that would prefer an imported van? The answer to that last question might just be the Kia Sedona. 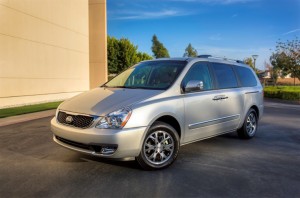 There are a pair of different levels and price points to choose from, starting with the base LX model all the way up to the loaded EX.

The slightly updated 2014 Sedona features a front bumper and grille that is very much in line with the look of other Kia models, including the Optima sedan and Sorento SUV.

A 3.5-liter V6 engine delivering 269-horsepower and 246 lb-ft of torque can be found under the hood of both trims. The engine is mated to a 6-speed automatic transmission, with both trims delivering an estimated 17/25 mpg city/highway.

The base LX model has an MSRP that starts at just $25,900 and includes a fantastic selection of features. Included are AC, MP3 connectivity, SiriusXM satellite radio, Bluetooth wireless that features voice recognition, audio controls on the steering wheel, six standard airbags (side curtains included), tire pressure monitoring, traction control and anti-lock brakes on all wheels.

The Sedona EX comes loaded with even more features and starts at just $30,900.

Both trims include seating for seven that includes flip, fold and tumble second row seats to allow easy access for third row passengers through the sliding side doors.

The third row of seats features a 60/40 split that have the ability to fold into a floor well to deliver more cargo space.

The 2014 Kia Sedona LX has an optional “power package” that adds dual power sliding doors into the mix.

Since the EX already comes with the power sliding doors, you might consider upgrading to thee “luxury package” that comes with such features as driver’s side memory setting for the seat and mirrors, a power sunroof and power adjustable pedals.

You also have the option of adding a navigation system and Infinity sound system and speakers to the EX.

As you can see, the 2014 Kia Sedona is a reasonably priced MPV option that comes with a list of standard features that outguns most others minivans currently on the market.