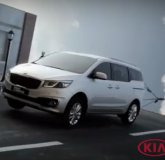 There are a number of reasons why people might choose to invest in a minivan, but far and away the most common of those reasons has to do with space and safety.

Kia is well aware of the safety aspect, which is why they have created a commercial that shows off the safety of the new Grand Carnival (sold as Sedona in U.S.), albeit in a bit of a different way.

It’s tough to tell what’s happening at the start, but something certainly feels off.

Pigeons sitting on the length of a light post certainly seems strange, that is until you realize that the upright pole is being shot in a horizontal style.

Things start to make some sense when the camera starts to rotate to show the scene as it’s supposed to look.

The question still remains, though, why would such a crazy set up, complete with mannequin people, be put together like that in the first place.

The fact of the matter is that people probably wouldn’t pay attention if what was being shown was a standard crash test.

Kia intentionally upped the intrigue so that the people watching would stay tuned in.

When it all becomes totally clear is when a crane comes along and hoists up the minivan to a height of over 40 feet.

Once that van is dropped, vertical and horizontal are going to come together with a bit of a bang.

With a flash and a bang, the van comes unhooked and drops from on high, hitting the ground at 56 km/h.

Once the smoke has cleared, it becomes apparent that the impact has done nothing to penetrate the passenger cell.