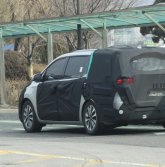 Here we have a couple of fresh spy shots of the forth-coming Kia Sedona people carrier, which is apparently undergoing final on-road testing only weeks before entering the serial mass production.

The latest set of pictures gives us quite a good look at some of the Sedona’s exterior styling details.

As evident from the spy photos, the redesigned model will incorporate a more up-right front fascia with large signature grille and new LED headlights, as well as a more prominent side character line and an elevated rear-quarter window section.

The overall styling seems to follow the design identity of Kia’s more recent creations like the Optima, Soul and Forte.

Inside, the new Kia Sedona is expected to feature a driver-focused cockpit, more sophisticated cabin features and a range of innovative infotainment systems. Kia promises the 2015 Sedona will also offer even more room than the outgoing model, whose capacity already trumps that of some other large MPVs.

On top of that, the new model will also offer improved driving dynamics (enhanced ride and handling), thanks in large part to the addition of the fully revised vehicle platform.

If any weakness exists with the current Sedona, it’s fuel economy, and Kia promises improvements on that front, too!

Although we haven’t heard of any rumors of new engines for the 2015 Sedona, the sources close to the automaker state the model will get a 2,0L T-GDI turbocharged engine for the first time.

A less potent, non-turbo 2,4L GDI unit is also expected to be available, while a V6 engine may be axed from the range.

The Euro-market Sedona MPV will also offer a choice of a revised 2,2L CRDI diesel engine which is expected to generate somewhere in-between the 180-200 horsepower.

Kia’s much-anticipated rollout of the 2015 Sedona should be a reason enough for minivan shoppers to wait a few more weeks before making their final purchasing decisions.

Stay tuned as Kia-world’s editors dish all the details at next month’s auto show! [Photos: Ubinine]

Next Sedona Minivan Captured On Video