This Kia Sportage crossover is “out of this world”.

The latest in our Kia owner’s interview series takes us further afield than ever before.

We travel to Jakarta, Indonesia to talk to Rockford, the proud owner of a Kia Sportage that is unlike any other model you have seen before.

Rockford is a 22-year old IT student who is very active in the Indonesian Sportage Community, where he is something of a mascot.

He was first drawn to the Kia brand when he saw the unique design of the Kia Soul. Rockford is a design enthusiast, and he was totally taken by the look of the Soul.

The bad news for Rockford was that the Soul was not available in his part of the world. The other vehicle in the line-up that caught his eye was the Sportage, with the tiger nose grille really catching his eye.

Rockford loved the look of the Sportage in its base form, but his love of design led to him wanting to make some changes once he got his hands on his own model.

Once he got a look at the features that came standard with the Sportage, as well as the amazing list of specs available for customization, Rockford knew that this was the perfect vehicle choice for him.

As you can see from the pictures, Rockford had created something truly unique. Read on to hear about the changes he has made, and what plans he has for the future.

1.Tell us something about your Kia car ownership experience so far?

So far its been an absolute awesomeness!

This is the 2nd Kia Ive owned, my father used to own a Carnival back in 2004 and my how things have changed.

The car runs smooth and the dealer is always superbly responsive to all of my requests and complaints (shout out to Kia Bintaro for being such an awesome community-centric dealer!).

Ive never owned a car that has this much bond between man, machine, dealer, and community.

The term “Family-like Care” runs deep and true, just ask any of my community mates! 🙂 Since January 1st 2012, lovin every moment

3. Honestly, what was your intention when you bought your Kia Sportage?

Three years ago I was initially looking for a decent mid size SUV that’s economical, looks great, and simply “stands out”.

Right after a week of searching, the new Sportage was launched. I immediately fell in love with the design and when I checked all of the specs, I couldn’t resist.

The balance between design and feature is simply stunning, but as a true petrolhead there’s no way Im letting my car off stock.

Now with the added touch of “PROVO’s DNA”, the car stands out even more.

Most people be like “wWhat car’s that?”, “Sweet ride man, must’ve cost u a fortune”, “KIA?! No effin way that’s a KIA!”, but most of my friends simply called it “Hotwheels”. 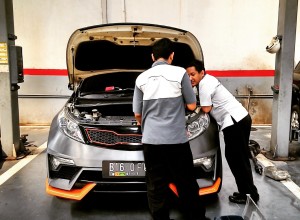 Sportage is already elegant even in stock form, but I wanted to add a bit of butch to my ride without losing its original character.

Wheels are a must and my pick goes to 20 inch RAV Predators finished in Gunmetal Polish wrapped in 245/40/R20 Nankang Noble Sport tyres.

To make it stand out even more, I wrapped it all up in 3M Brushed Titanium vinyl coupled with Harley Orange accents on the roof, spoiler, diffuser, and door handles.

And finally to top it all off, I switched the taillights with a Smoked LED Bar taillights i got from Korea. My most recent mod was the LED Foglamp Module courtesy of the Indonesian Sportage Community.

7. What Kia Sportage accessories have you installed so far / do you have any future plans?