The second day of our last week’s Kia road-trip to Poland (Euro2012) was certainly one of the highlights of the whole 6-day journey.

After spending a day in the beautiful city of Wienna, we drove our brand-new Kia cee’d further towards Slovakia where we were scheduled to visit Kia’s state-of-the-art manufacturing plant.

The Slovak factory is Kia’s only European manufacturing plant.

Five other company plants are located in South Korea, two in China (with one additional being under construction) and one in the USA.

Located in a vast industrial complex extending over 223 hectares in Zilina (the largest town in hilly North West Slovakia), the plant employs around 3,500 people with more than 95% of all being the citizens of Slovakia. The carmaker’s European facility utilizes a large number of the state-of-the-art car manufacturing technologies including more than 410 robots.

Producing at full capacity, the plant can churn out around 300,000 new Kia vehicles per year, or approximately 100 units per employee. 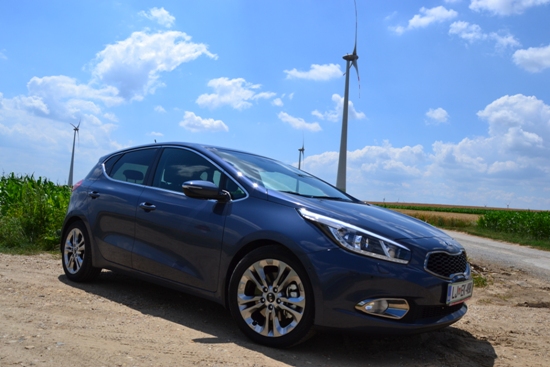 Kia’s plant is also running a trial production of the cee’d Sporty Wagon, which is scheduled to go on sale in Europe this autumn.

There are also plans to start the production of the 3-door Kia pro_cee’d sometime around new year if not earlier.

The all-new Kia pro_cee’d is expected to make its official public debut at the Paris Auto Show in September, while sales are rumored to commence in the first quarter of 2013.

The highly-advanced Kia plant began operating in September 2006 roughly two years after the signing ceremony with the Slovak Government to authorize officially the construction of its very-first European plant.

Since late 2006, the Kia factory achieved the following production milestones:

The most significant production landmark was achieved in just over five years after the factory opened its doors and that was when a 1,000,000th vehicle rolled off Kia’s Zilina plant.

The 1-millionth vehicle was a white coated Kia cee’d Sporty Wagon which was later donated to the Slovakian children charity, called the Red Nose Clowndoctors. The whole production process of a vehicle begins in the press shop which features two main press lines that can produce more than 67 various panel types. One panel is pressed within every 20 seconds, while the total production capacity of the Press shop is estimated at around 5,000,000 panels per year.

To ensure the highest quality of the manufactured car body parts, each panel is checked in detail by using Kia’s unique 3D optical inspection system and their quality inspectors. The production of a car continues in the body shop, where the car bodies are made by putting together and welding of sub-assemblies such as floor, left and right side structure, and roof assembly.

The welding automation ratio in the Body shop is 100%. There are more than 320 robots used for welding and processes of loading and conveying of car parts.

The possibility to simultaneously manufacture 5 different car models on the same production line is one of the most important feats of the body shop. From the body shop, the car bodies are moved into the paint shop via conveyor system with a total length of 7,5 km!
Each and every car body goes through various surface treatments to obtain its final color.

The body shop also features a unique rotation dipping system which ensures that the protection substance reaches even the most inaccessible body parts. More than 1,000 employees who work in the assembly shop are responsible for installing the cables, minor interior and exterior car parts, front and rear glass, seats, wheels and other car components.

Kia is the only car manufacturer in the region that produces engines on it’s own, rahter than importing them from other locations. The company runs two engine shops in Zilina which produce both, petrol and diesel engines with displacements of 1.4L, 1,6L, 1,7L and 2,0L.

The engines are fitted to all Kia cars produced in Zilina as well as exported to Hyundai’s manufacturing plant in Czech Republic (about 60 km away from the factory), where Hyundai produces the i30, ix35 and ix20 mini-MPV models.