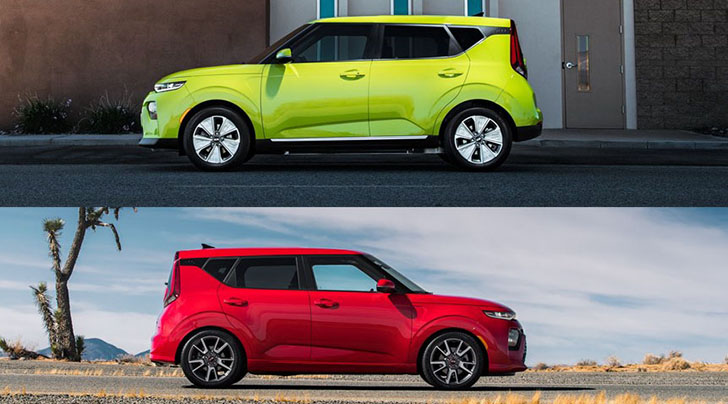 We already know that the Soul crossover has been a huge success for Kia, with the boxy vehicle frequently at or near the top of the sales list for the Koreans.

For the third generation, the Soul family has been expanded with the EV, GT-Line Turbo and X-Line models.

Today, we are going to do a picture comparison of the Soul Turbo and all-electric Soul models.

There has been a ton of positive chatter about the new Soul EV, with the plaudits becoming louder once the vehicle was officially shown off at the L.A. Auto Show last year.

For those that love the look of the 3rd generation model Soul with the combustion engine under the hood, the great news is that the styling between that one and the new EV is pretty similar.

That said, look close enough and you will definitely see some styling differences between the two.

Rather than forcing you to try and spot those differences, we have taken the time to put together this Kia news article showing you all the differences. For the purposes of this blog post, we are comparing the battery-powered Kia Soul EV with the gas-powered Soul GT Turbo.

Besides looking at the style differences, we will also talk about some of the technical differences between the two models.

We have a lot of ground to cover here, so let’s try to break down the differences between the Soul EV and the Soul Turbo by focusing on specific areas of the two vehicles.

We are of the belief that it is best to start with the part of the vehicle where the biggest differences can be found, which just happens to be at the front.

Since both of these models are designed to be set apart from the base model, it makes sense that they would each feature distinct characteristics that would let people know which is which.

Let’s take a closer look at the front of both vehicles, breaking down each on individually to give you a detailed idea of the differences.

The GT-Line comes with an aggressively styled, sporty front fascia that has slim LED headlights up top.

It also has a large air opening in the lower part of the grille, which many of you will recognize as the Kia H signature grille. Also present are stylish LED foglamps and GT badging.

With the Soul EV model, it’s all about creating a more aerodynamic set-up, which begins with fewer air openings on the front fascia.

The enclosed space up front serves a purpose besides aerodynamics, though, as this is also where the charging port can be found.

As for the lighting set-up, the all-electric Kia Soul comes equipped with the same LED headlights and fog lights as its sibling.

We have now essentially covered all the differences in the front of the two models, so now it’s time to move around to the side for a look at the profile.

As you can see from the side profile pictures of the Soul EV and the Turbo, there are no clear visible differences when you look at the body. The one thing that stands out, though, is that both models come with very differently styled alloy wheels.

Besides the obvious style differences, there are also different wheel sizes on each of the vehicles. The all-electric Kia Soul EV comes with 17-inch alloys and wheels, while the GT-Line Turbo model rides on larger 18-inch alloy wheels.

What you might not immediately notice is that there is also a difference in the ground clearance. The all-electric Soul has slightly less space underneath, which is not that surprising when you consider that the battery pack is located under the vehicle.

Once again, the back of the Soul EV is essentially the same as the GT-Line. They are in fact basically identical, with very cool boomerang-shaped LED lights being the highlight of the entire set-up.

While the upper portion of the rear is the same, things get a little different on the lower end. Again, the differences here are in place to clearly separate the two vehicles and speak top their individual personalities.

The GT-Line is very obviously a gas-powered model, with the center-positioned dual chrome tailpipe clearly visible. The sporty GT badging is also present, as is a more rugged looking bumper with vertical air outlets located on each side.

Like the front of the vehicle, the Soul EV is all about aerodynamics around back.

The bumper design on the EV helps make this model a little more aerodynamic, while the total absence of a tailpipe makes it clear that you are looking at an all-electric model.

Now that we have covered the styling difference between the all-electric and the gas-powered versions of the 2022 Kia Soul, we can now turn our attention to the technical specifications.

Rather than boring you guys and bogging you down with additional text and numbers, we thought that the easiest way to show the differences would be via a side by side comparison table that features things like horsepower and torque ratings, MPG figures, driving range and more.